Jeanne Cordova, of Mexican-Irish descent, was born on July 18, 1948 in Bremerhaven, Germany and grew up in Los Angeles, California. At 17 she joined the convent of the Immaculate Heart of Mary in Los Angeles. She left the convent and attended the University of California, Los Angeles where she received her Bachelors Degree in Social Welfare. She received her Master’s Degree in Social Work in 1972. Her first Daughters of Bilitis meeting was on October 3, 1970 and eventually she president of the Los Angeles Chapter not long after she joined. As the Los Angeles president, she put out a newsletter that evolved into the Lesbian Tide. She focused very much on the feminist movement and issues unique to the cause first and foremost.

Over the course of the years she was involved with many organizations and events such as but not limited to: the first West Coast Lesbian Conference at Metropolitan Community church (1971), the first National Lesbian Conference at the University of California, Los Angeles (1973), the Los Angeles Gay Community Service Center, the Los Angeles Free Press (1973-1976), the first National Women’s Conference for International Women’s Year in Houston (1977), the ballot campaign and defeat of the anti-gay Proposition 6 Briggs Initiative (1978), the National Lesbian Feminist Organization (1978), the Connexxus Women’s Center/Centro de Mujeres (1984-1988), Square Peg Magazine (1992-94), and the west coast Butch Voices Los Angeles 2010 Conference.

Gallo, M.M. (2006). Different Daughters—A History of the Daughters of Bilitis and the Rise of the Lesbian Movement. New York: Carroll & Graf Publishers An Imprint of Avalon Publishing Group, Inc. 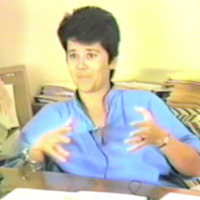 Jean Cordova, Tape 1 of 1, October 27, 1988
Jean Cordova discusses how the Daughters of Bilitis inspired her to change her career path and passions in life from aspirations of playing soft ball, to becoming highly involved in activism.