Edith Eyde (pseudonym Lisa Ben) was born November 7, 1921 in San Francisco. She grew up in Los Altos, CA on an apricrot ranch. She created Vice Versa, often considered the first lesbian publication, in 1947. Eyde contributed many articles to The Ladder. In addition to being a writer, Eyde was a musician. She performs several songs during her interview.

-From Gallo, M. (2006). Different daughters: A history of the Daughers of Bilitis and the rise of the lesbian rights movement. New York: Carroll & Graf.

You can find additional information on her involvement with zines on the ZineWiki. 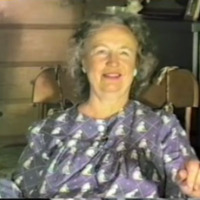 LHA Daughters of Bilitis Video Project: Edith Eyde, Tape 2 of 2, October 25, 1988
Edith Eyde continues to discuss her experiences in California, interacting with others who were vested in the same interests surrounding lesbian culture, and being proactive in literature and the arts. 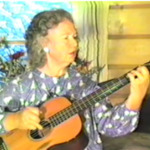 LHA Daughters of Bilitis Video Project: Edith Eyde, Tape 1 of 2, October 25, 1988
Edith Eyde talks about her life growing up in rural southern California, moving to Los Angelos and discovering the lesbian culture there.