Arcus Flynn was born in March of 1939. She grew up in an Irish working class family in a New York City tenement. Raised Catholic and pressured to marry by her family, she decided to join a Dominican convent. Joining with the minimum dowry, she encountered class problems at the convent, where she was used mostly as a worker. Overworked, she became seriously ill and wound up leaving the convent after 5 years.

Returning home, Arcus decided to join nursing school at the New York Family Hospital. Suffering from depression and isolation, and unable to come out as a lesbian to her family and friends, Arcus discovered the Daughters of Bilitis group and began to attend meetings where she found a much needed sense of community and friendship. She later became involved with the Women’s Movement in the 1970s. For International Women’s day in 1973, Arcus helped to create a huge purple dinosaur which they wheeled to AMNH as part of a demonstration for women’s rights.

Finding no relief in traditional prescription medicines for her own health issues she turned to natural remedies. While attending lab tech school she embarked on her study of herbology at the Tree of Life Bookstore and Education Center in Harlem. She opened her own school of herbology at St Mark’s Clinic and later opened the Meadowstreet Herbal Apothecary on E4th Street on the Lower East Side of NYC. Arcus Flynn currently lives in Ghent, New York with her partner of over 30 years. 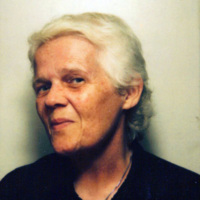 Arcus Flynn discusses her early life and her struggle with isolation and depression, her eventual discovery of the Daughters of Bilitis meetings and the community and friendships she found there.