On March 28, 1989, the Women's Committee joined forces with all members of ACT UP to protest the inadequacy of New York City's AIDS policies under Mayor Ed Koch. While the city saw one fourth of the nation's total deaths, Mayor Koch neglected the AIDS crisis and cut local and state AIDS services. This action celebrated ACT UP's second anniversary and drew the largest documented population of demonstrators (3,000) to New York's City Hall. The demonstrators demanded more government funding for the AIDS epidemic and services for the disease. City Hall Park was flooded with activity and shouts, "Act up! Fight back! Fight AIDS!". The entrance and exit of the Brooklyn Bridge was temporarily halted, interrupting rush hour traffic, by demonstrators created a human chain while shouting, "Health care is a right!" The action lasted three hours and two hundred demonstrators were arrested. Inside City Hall, Mayor Koch held a press conference in a hallway to avoid the shouts from demonstrators outside. In the conference, Koch agreed that more needed to be done for the AIDS crisis in New York, but blamed his inaction on federal funding.

This video clip of the Target City Hall action from DIVA TV is introduced with the strong, impactful statement, "We are an affinity group within ACT UP. We are committed to making media, which directly counters and interferes with dominant media assumptions about aids and governmental negligence in dealing with the aids crisis. We are committed to challenging a racist, sexist and heterosexist dominant media, which is complicit with our repressive government." 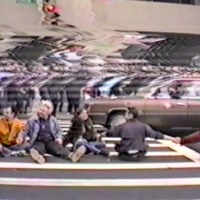 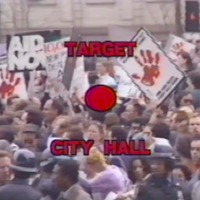