On October 11, 1988, ACT UP conducted a protest against the Food and Drug Administration (FDA), calling for immediate action related to its policies on the drug approval process that prevented those in need access to potentially life-saving drugs. This action was one of the largest demonstrations in history since the Vietnam War. The work of ACT UP was so successful that the FDA shut down for a whole day and within a year the drug approval process was largely increased. Later, the FDA changed its definition of AIDS to include cervical cancer, bacterial infections and tuberculosis. In 1992, even after the great success with the initial action several years prior, the FDA did not yet include the proper guidelines to usher women into clinical trials for HIV/AIDS, which was a right held hostage by the Food and Drug Administration's guidelines. The FDA caused thousands of deaths with its exclusion of women and bureaucratic negligence. ACT UP demanded the obvious inclusion of women and minorities into trials that might save their lives. The Women's Committee of ACT UP worked towards filing a citizen's petition for inclusion of women in their trials and after being rejected for inclusion in several meetings on gender effects in clinical drug research, the Women's Committee pressured Randy Wycoff, the head of AIDS work at the FDA, to invite infected women to their discussion with the PHS and NIH. In 1992, the FDA met with the other government agencies and their "invited guests" from ACT UP to reconsider current guidelines for the inclusion of women in their clinical trials and testing. ACT UP members developed a document titled, Guidelines for the Ethical Inclusion of Women in Clinical Trials, which was presented at this meeting. This audio clip from an ACT UP meeting with FDA officials demonstrates the Women's Committee's commitment to representing diversity in clinical trials. 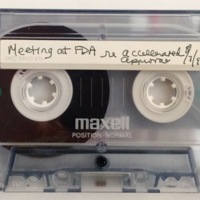 Meeting at FDA Re Accelerated Approval