In January of 1990, the Women's Committee of ACT UP organized their first Center for Disease Control Action with the help of ACT UP Atlanta and ACT UP New York. This action was focused on changing the CDC's definition of the AIDS epidemic.

Flyer circulated by ACT UP

At this point, the CDC did not recognize bacterial pneumonia, cervical cancer or pelvic inflammatory disease as symptoms of AIDS in women. Because the CDC did not define these experiences as AIDS, women were often diagnosed with AIDS Related Complex or HIV. The Women's Committee of ACT UP created the Women's Research and Treatment Agenda, to establish standards for the CDC to live up to, as well as demand a national conference on Women and AIDS and a gynecologist on every AIDS research team. Despite the CDC meeting with men in ACT UP, the Women's Committee did not have equal experiences.

ACT UP NY and ACT UP Atlanta came together on January 8th through January 9th in two days of demonstrations in Atlanta, Georgia. During the first action sixty-three people were arrested lying down in the street at the State Capitol because of their demands to repeal sodomy laws. On the second day hundreds of demonstrators stormed the federal Centers for Disease Control headquarters with signs, banners and costumes to protest their narrow definition of AIDS. Under their definition AIDS did not include gynecological illnesses, illnesses due to injection drug usage and/or illnesses more common to children and people of color. Thus, these minorities were completely excluded from clinical trials and testing. Forty-nine of the demonstrators were arrested, however the membership of ACT UP Atlanta tripled in size. On December 3, 1990, the second CDC action in Atlanta, GA, was held, focusing on changing the CDC definition of AIDS to include infections present in women, drug users and poor people.  Women with HIV led a march and action at the CDC in the pouring rain and 100 people were arrested. 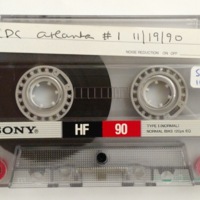 Meeting Between ACT UP and CDC, Tape 1/2

Meeting between ACT UP and CDC, Tape 2/2 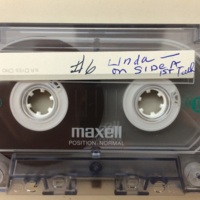