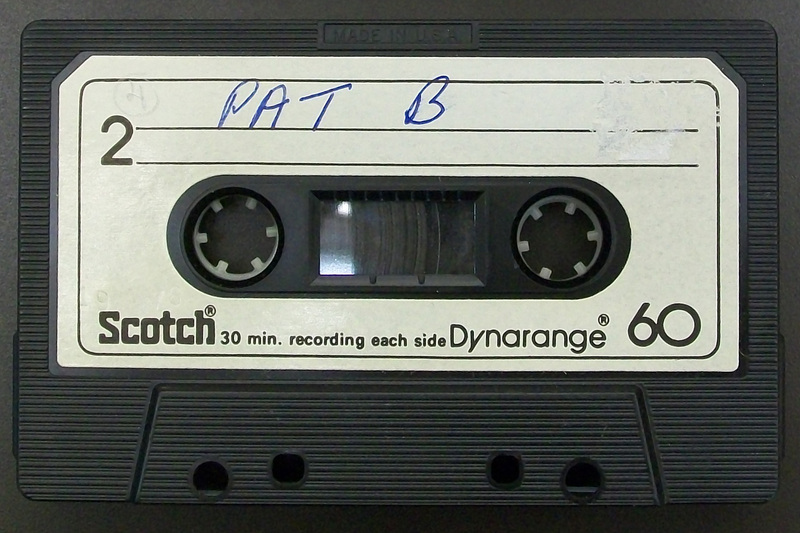 Side A: Pat talks about her childhood in North Port, N.Y., her relationship with her parents and siblings. She goes into detail about her estranged relationship with her older sister. She describes when she first knew that she was a lesbian and tells the history of her relationships with women. She starts with her first affair at age 13, with a nun from her Catholic school - Sister Eugenie - to a relationship she had with Maryann (Marty). She describes her time at nursing school in Niagara Falls, N.Y., and the gay bars she frequented until she moved to Florida with her then girlfriend. She says she moved to Buffalo, N.Y., in the late 1950s, and describes the Buffalo bar scene, mentioning Dingles, Mardi Gras, the Chesterfield, the Carousel and the Carol Hotel. Pat mentions that the Carousel was very elite, something she did not like. This leads her into a discussion on â€œrole playâ€ and how important it was to distinguish oneself as either a butch or a femme. She classified herself as butch, but stated that she was very uncomfortable with the label and now prefers to be less overt.

Side B: In this interview Pat talks about how she does not like or feel comfortable in the gay community. She has never identified with it, or been made to feel welcome. This is one of the reasons that she does not maintain friendships with other lesbians, unless she is having a sexual relationship with them. She mentions being victimized and physically assaulted because she was a butch lesbian. Interviewer Madeline enters the discussion, speaking about her own sexual experiences with women. Madeline classifies Pat as â€œuntouchable,â€ something that Pat denies, stating that she is simply very private. She feels that sex is a necessary but not important part of a relationship; it is something that is never sought or welcomed. She is suspicious of those who claim to experience sexual pleasure, including Madeline.