Epidemiology Meeting between ACT UP and NIAID about·First Natural History Study of Women with HIV, Tape 1 of 3 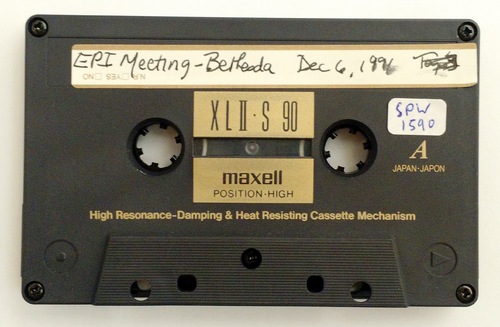 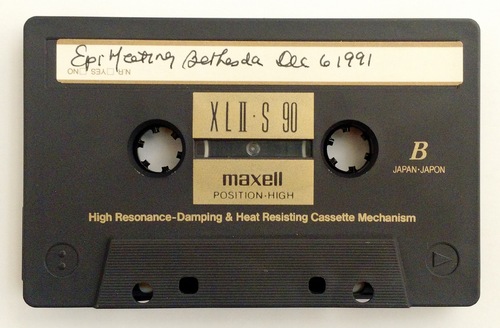 Epidemiology Meeting between ACT UP and NIAID about·First Natural History Study of Women with HIV, Tape 1 of 3

Meeting between NIAID employee Diane Hartnell and ACT UP, Women with HIV/AIDS, and AIDS activists in Bethesda, Maryland regarding the inclusion and diversity of women in AIDS studies, sexual health, ACTG, and pediatric care.
Meeting between ACT UP and Women with HIV/AIDS and AIDS activists Seh Welch, Mary Lucy, Maxine Wolfe and National Institute of Allergy and Infectious Diseases (NIAID) employee Diane Hartnell in Bethesda, Maryland. Hartnell, who began at the NIAID as Sten Vermund's assistant, discusses research and resources for health information regarding HIV/AIDS infected women, in addition to other issues involving women's health. Welch, Lucy, and Wolfe raise concerns about the inclusion of women in AIDS studies, sexual health, the ACTG, pediatric care, and diversity in research participants (especially Native American women).

See SPW 1591 and 1592 (parts two and three). Note included with tape is enclosed in donors binder and reads as follows: Meetings between Women with HIV/AIDS and AIDS activists with Sten Vermund, head of epidemiology at NIAID and later that week with staff people at NIAID (arranged by Diane Hartell) to discuss the first natural history study of women with HIV, Dec. 4, 1991 and Dec. 6, 1991 As part of the ACT UP Women's Network's ongoing work concerning women with HIV we had made a demand at our July meeting with Tony Fauci that there had to be a major epidemiological study of women with HIV. The NIAID had conducted the MACS study following 5,000 gay/bi men with HIV from 1984 on, spent millions on it and it served as the basis for all of the info about T cells, infections, etc. But it did not contain any women. Sten Vermund, of NIAID, who organized that study, had been pleading for one for women for years but Fauci paid him no mind, partly because he was busy pacifying the ACT UP men who eventually became his supporters (Mark Harrington, Peter Staley, et al.) by putting all of NIAID's money into clinical trials for men. Sten Vermund was, and as of this writing still is, an ally of the ACT UP women (he had done research on HPV and HIV). In our CDC campaign he was the lone government voice supporting our position. We arranged this meeting with him to state our concerns about this first study (which we pressured Fauci to fund) in terms of who would be in it, how it would be done, etc. Diane Harte II was a good friend of Jeff Gates, a PW A from ACT UP NY who was also a friend of mine. She got this job working as Sten's assistant (before she had worked with injection drug using women) and orchestrated all of these meetings to support us. The first meeting took place with Sten and about 25 people attending during the ACTG meetings also held that week. Then on Friday, Dec. 6, about 15 women we had organized met with other NIAID staff people involved in ongoing epi studies and who would be involved in the later ones. We shared with
The epi study was finally funded and then Bush appointed Healy as head of NIH and she held up the fund to "review" the work. We did a national phone zap and got the funds released. At that meeting with Sten we insisted that we have people on the peer review panels to avoid doing business as usual (giving grants to wellheeled researchers who saw no women) and that we also create a national overview board with women PW As and activists to make sure the study went well. We also told him he had to help those sites seeing all of the women who were not researchers to create grant applications which could get the funding. Both happened and because Linda Meredith and Keri Duran (HIV+, Boston ACT UP) sat on the peer review panel, the final grants went to Judith Cohen's group in
SF, Kathy Anastas' group in the Bronx and Mary Lucy's group (Alexandra Levine, MD) in LA. All of these studies included lesbian issues and all were based on cooperation with community based groups. A fourth one went to Mary Young at Georgetown who was an M.D. we located and enlisted in our CDC and SSA work because she had data relevant and saw many women. However, her grant was
not great but they gave it to her anyway. At this writing the grant is just beginning.
Recorded Persons: Seh Welch, Mary Lucy, Maxine Wolfe, Diane Hartell
Persons Mentioned: Marsha Cannichael, Dawn Smith, Martha Rogers, Eliza Sullivan, Gloria Weissman, Bert Peterson, Carol Hogue