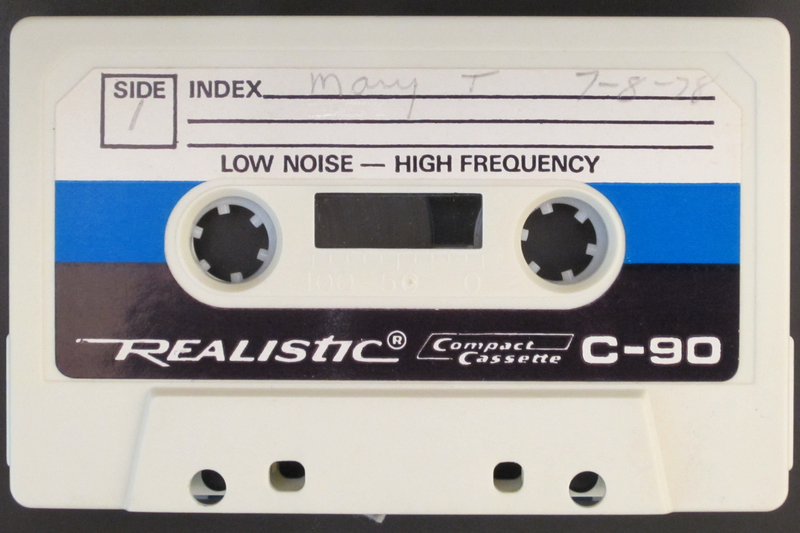 Side A: Mary briefly describes her childhood and family dynamics. Mary and the interviewer then discuss the first time Mary recognized being different and her thoughts on desiring women at a young age, yet not knowing about lesbianism as a concept or about the lesbian community. Mary then recalls the first time she encountered the word "lesbian" when she joined the U.S. Air Force and describes her experiences with women while in the service. Mary talks about being a lesbian in the military, the investigation into her conduct, and her dishonorable discharge. After Mary got another job, she started going to a bar in Buffalo, N.Y., and she talks about the other lesbians she met there. Mary then discovered other bars and talks about the scene as well as the role-playing of butch and femme.

Constant whirring noise that stops about 10 minutes into the recording.

Side B: Mary continues the discussion on butch and femme role-playing. She elaborates on fights, holding down jobs, and being "out." She also explains the relationships lesbians had with gay men in Buffalo, N.Y., and the bar scene dynamics of mixed, gay, or lesbian bars. Mary and the interviewer discuss gay activism and the difficulties of being involved in activism at that time. Mary also describes outings where there was a risk of being visible as a group, such as going on picnics or renting cottages. She elaborates on her experience with social dynamics like cliques and having heterosexual friends within the lesbian and gay community. Mary then expands upon the nature of her relationships with women as well as with black lesbians - racial prejudice and relationships are discussed.

Constant whirring noise that stops about 5 minutes into the recording.