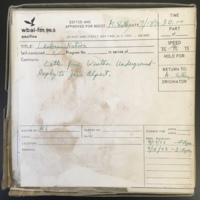 Martha reads a response letter originally published in "Off Our Backs" from the women of Weather Underground in reply to Jane Alpert's letter. This letter references topics including the bridge between the radical feminism movement and the left, the divisions in the women's movement, and the ideals of the organization. [Music from Bali]