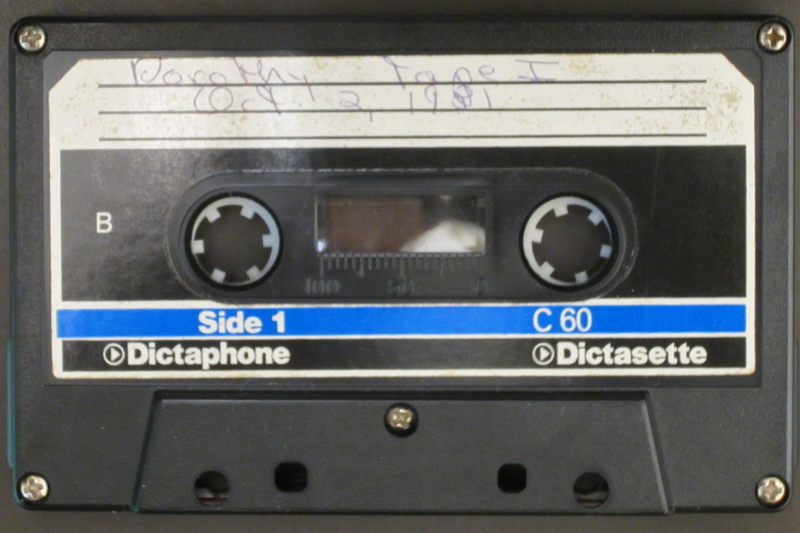 Side A: Dorothy discusses her personal life and how she came to discover that she was a lesbian. She talks about her marriage and separation. She discusses her relationships with women, all of which were long-term. Dorothy talks about her job in engineering as a tool designer and the fact that she performed a man's work for a man's salary. She discusses lesbian social life during the 1930s, 1940s, and 1950s and names several popular bars including Eddy's Tavern, Ralph Martin. She talks about her developing alcoholism and the prominence of this disease among lesbians in general, perhaps as a result of their uncertainty about life. Dorothy also talks about butch and femme roles in lesbianism, stating that she doesn't identify herself with either role despite the fact that the butches identified her as one of them.

Side B: Dorothy continues the discussion of roles in lesbianism and the division between the two groups in bars. She says that her "crowd" did not distinguish between these two groups and she ultimately stopped going to bars, partly as a result of the need for role division. She discusses in some depth her problem with alcohol and talks about her membership in Alcoholics Anonymous. She talks about how she decided that she was a lesbian and gives further details about her first relationship. She also speculates on whether or not other people knew she was a lesbian, including her mother and acquaintances such as her landlord. She says that she has never had any problems with people discriminating against her. Dorothy also continues to talk about the social dynamics of bars in Buffalo.